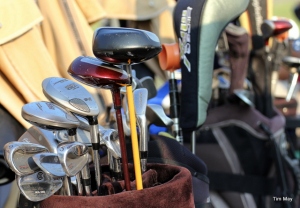 This is the one week of the year that I dust off my golf clubs (more like clear off the cobwebs) and slip into my golf shoes (but check for spider nests in the toes first). Golf is played twice in one week’s time: Monday in Texas, Friday in Kansas (both charity fundraisers BTW). I play twice a year, and both those tee times are in the same week.

This is the week I also seek counsel from my clergy friends to help me through the next five days.  My possessed golf clubs, when used infrequently, have a way of controlling a meek personality, any kind of recreational fun, and testing one’s conviction to the 3rd commandment. Maybe if I listen to gospel music on the iPod while attempting to play this silly game might help….hmmmm

But wait! For the first time in 4 years, I did not play in the Monday tournament. I have my (several) reasons for not partaking, but truly it is an experiment for my golf play. You see in years past, I thought the Monday tournament would be a warmup to the Friday tournament. Well NOT! I play worsed on Friday without a handicapping doubt – usually at my Dad’s, if not my brothers, nephews, and nieces peril. I have golf balls that do not cooperate with my intent whatsoever…. 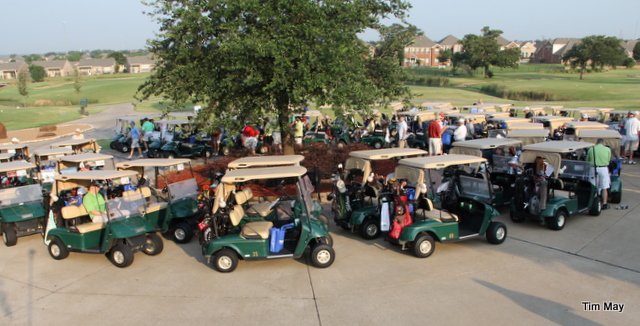 Now don’t get me wrong…I did attend Monday’s tournament. I tried to do volunteer duty (that’s another story in itself) and ended up spending the morning hours talking to golfing friends and taking a few photos for the tournament organizers. That was nice! I was

able to volunteer a recurring date with the #1 tee box at 10 minute intervals. Some of the dates were bed…I’m not always good at figuring out how best to photograph golfers that were being controlled by their golf clubs (like they do me – I should have given them Brother Bill’s phone number for counseling).

There was a breeze, shade tree, and plenty of water consumed before the 97° heat set in for the afternoon. By the time the heat came, I was home computer gaming my golf with Tiger. 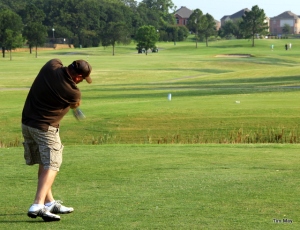 Good charity event today: Nicholas Hibberd Memorial Golf Tournment, organized by the Lake Cities Education Foundation. Many golfers (250-300); much money is contributed to the Foundation during this once-a-year golfing soiree. Oddly (or is it humorously?), the guys that used to play regularly at this tournament now volunteer not to play – it is them that gave me the public excuse to show up at the course this morning without clubs.

You know what’s another way-cool thing about today’s tournament? My back doesn’t hurt and my fair Irish skin did not get overexposed!

I’m ready for Friday now! That post is forthcoming (maybe on Saturday if I can talk the FS  into driving back from Kansas…ughh posting by iPhone with fat fingers is just about as frustrating as playing golf once a year). But do stay tuned – Friday is a family outing and the stories will most likely be elaborate, far fetched, exaggerated, and yes, controlling of one’s personality for a year.

6 thoughts on “Teed Off and Ready”